YOUR GUIDE TO CRYPTO-MINING

Crypto-assets are digital, global money systems that allow virtual currency
to be sent and received instantly via the internet

Got a question? Speak with one of our Crypto Mining experts

An introduction to crypto-assets

You’ve probably heard of ‘Bitcoin’ – which was the first of many crypto-assets
now in existence throughout the world.

Crypto-assets are digital, global money systems that allow virtual currency to be sent and received via the internet, without being processed by the banking system we use to handle our regular money.

If you think of the global banking system as being a huge ledger of transactions between individuals, companies & nations, crypto-assets have their own equivalent. This is known as the blockchain – a public ledger that keeps track of every transaction taking place in the system network.

How does crypto-mining work?

Crypto-mining involves updating the crypto-asset system ledger (or blockchain) of crypto-transactions. The process is carried out by crypto-miners, who use crypto-mining equipment (extremely powerful computers) in competition against other crypto-miners in a race to solve a mathematical problem by guessing a specific number. The first miner who identifies the number correctly is rewarded by being allowed to update the blockchain. At the same time, they receive a reward of newly minted crypto-assets.

The types of mining equipment that successful crypto-miners use aren’t regular household computers – these simply aren’t powerful enough. Crypto-miners’ equipment comprises very powerful computer servers, nowadays knowns as ASICs – and the more ASICs a crypto-miner has, the more computing power they have, and the more likely they are to solve the mathematical problem by figuring out the right number before anyone else does.

When a crypto-miner’s computer guesses the right number, the computer’s mining program decides which of the many current pending transactions within the crypto-asset system will be grouped together into a block of transactions (thus a number of blocks become the blockchain).

The act of compiling this block is equivalent to being handed over the ledger of the crypto-asset system, turning the winning crypto-miner into the temporary central banker and ledger-holder for the entire system. The winning crypto-miner updates the blockchain with the newly created block – and the newly created block, along with the correct solution to the computational problem, is dispatched onto the whole of the crypto-asset network so that all other computers in the network can validate and approve it.

The crypto-asset system generates a fixed amount of assets by way of reward to the successful crypto-miner, who also receives any fees that were generated by the transactions that the crypto-miner put into the block that they were compiling.

The more mining power you have, the harder it becomes to win. To be inflation- proof, crypto-asset systems need to control the rate and number of new crypto -assets that are generated within the system. This control is achieved by ensuring that when more miners start mining the system, it gets harder to

Back when crypto-assets first emerged some ten years ago, there were very few crypto-miners, so relatively little computational power was needed to guess the number problems correctly. As a result, the CPU (Central Processing Unit) of an average household computer was more than adequate for the job – but as more and more people joined the crypto-mining community, it became more and more of a race to find the right number – which meant that people were using ever more powerful computers.

The first major computer upgrade for crypto-asset mining was the use of GPUs (Graphics Processing Units), which were originally designed for gamers who played computer games with powerful graphics requirements (1 GPU = about 30 CPUs).

Then there was another power hike, with the introduction of FPGAs (Field-Programmable Gate Array), which were up to 100 times faster than GPUs.

Finally, the ASIC (Application-Specific Integrated Circuit) was introduced, and remains the industry standard today – principally because ASICs are designed specifically for crypto-asset mining.

Who are the miners –
and how profitable are they?

Miners can be individuals – if they have the equipment and assets to run a
solo operation; they might also be big professional corporate outfits that
own mining ‘farms’ (vast arrays of computers held in huge buildings, often in
places on the planet where power is cheap) – but often, miners are in the
form of mining pools: number of miners pool their resources to compete
more effectively, then share the resultant crypto-asset wins in proportion to
the amount of mining power each contributed.

Assessing the profitability of crypto-mining requires balancing a number of
factors, and every wise crypto-miner needs to undertake this process when
committing themselves to crypto-mining. Factors include:

• Cost of energy use: the large amount of computing power needed for crypto-mining uses up vast amounts of electricity, the cost of which varies according to where you are in the world and how much local energy costs.

• Hash rate: the prize-winning mathematical problem that needs solving is called a ‘hash’, and ‘hash rate’ is the amount of guesses at the right answer a computer can make each second.

• Mining difficulty: already discussed above, mining difficulty can be expressed as a number representing how hard it is to mine crypto-assets – a factor relating to the amount of miners, and their combined mining power, in the system. This is a particularly tricky variable, since it is difficult to predict how many miners are joining or falling out of the network at any one time.

Once you have estimated all these variables, you can feed them into the crypto-asset mining calculator and that will tell you how many crypto-assets you can hope to earn monthly.

Who are the miners –
and how profitable are they?

If you’ve decided that crypto-mining is for you, you’ll need to

• Set aside a given amount to start off your crypto-mining enterprise. Only you
can decide how much to invest.

• Choose your crypto-mining partner – and naturally, we recommend
HOSTMINE! That’s because HOSTMINE is tailor-made to your personal wishes,
your circumstances and your level of financial commitment.

Having read this introduction to crypto-mining, you’re now ready to move on through this website and discover the benefits of crypto-mining with HOSTMINE!

Check out our wide range of crypto mining servers 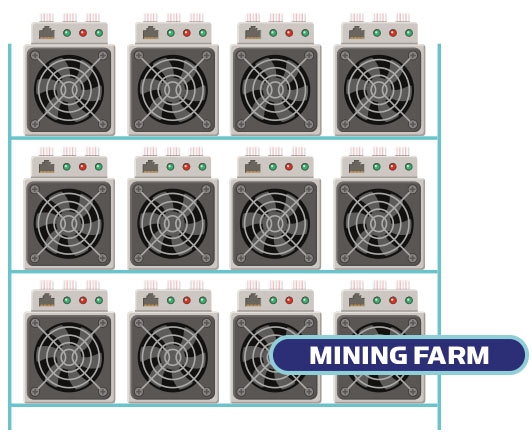 Did you know what is a NO COINER? #cryptocurrency